Located just off the busy intersection of Shelbourne and Cedar Hill Cross Road, the Fig Deli goes about its day creating and selling tasty dishes and food from the Mediterranean region. The common commuter cruising along Shelbourne has passed the Fig Deli a hundred times before learning it was there. Advertising, says Yasser Youssef, the store’s proud owner, is “by word of mouth.”

Spend twenty minutes in the Fig Deli and you’ll learn very quickly that Yasser is the beating heart of the business. As the owner-operator, customer service representative, and maintenance guy, Yasser is the steady captain of the Fig Deli. Yasser immigrated to Victoria, Canada in 1985. He was born and raised in the Beqaa Valley in Lebanon, but left his native country to escape poverty and the violence of the Lebanese Civil War. Once in Canada, Yasser pursued his passion of learning about and protecting all life forms. He earned a degree in Environmental Science from Royal Roads University. In 2002, embracing the Middle Eastern wisdom of “work in food for you’ll never go hungry”, he began a small grocery shop on Quadra Street. While operating his fledgling deli, Yasser discovered there was a great demand for his Mediterranean food and deli. Within a few years, his business grew and allowed him to expand to his current larger, more accommodating location at 1551 Cedar Hill Cross Road.

Step inside the Fig Deli, and one immediately feels the ease and casualness and the aromas from the ambiance inside. The employees are having fun, yet productive. One Canadian employee is a retired engineer, looking for ways to get out of the house for a couple hours a week. Yasser commands his environment, yet is quick to engage, welcome, and genuinely thank each of his customers. Yasser paints the Fig Deli as a friendly place where relationships thrive over profit. He says he cares more about the wellness of his customers than how much they spend at his store. This relationship-first mentality is proven time and time again as Yasser frequently offers snacks, bread, or a drink on the house to his regular customers. This sense of community is fostered within Fig Deli and has caught the attention of regulars that come for the food but stay for the conversation and the familiar faces. Yasser is also quick to note that the success of Fig Deli is due to the enormous contributions of his family and his employees. Yasser emphasizes, "I couldn't have done any of this without the support of my family and my fantastic team. My team helped me implement my vision and the community recognized this effort and adopted Fig Deli as their own."

“People know they could go to Wal-Mart and get the same item for a little cheaper, but they come here because of the community,” Yasser says. “It’s not just the food. The food might bring people here in the first place, but it’s the community that it forms and that keeps bringing people back.”

Yasser prefers to do business with local suppliers rather than in Vancouver to support other businesses. The Fig Deli buys and trades products with the locally owned and operated business such as, for example, the Rootcellar and Islands West. Further, Fig Deli supports fundraises for sponsoring refugees hoping to come to Canada- and was involved with supporting the recent influx of Syrian refugees. Fig Deli also famously raised funds to send a competitive sailor to the Paralympics.

The Fig Deli enjoys a high demand for its goods, and the food itself catalyzes connections among customers and staff. The Fig Deli has successfully cultivated a loyal community that is created initially about the food but, in time, has become about the people. If Yasser is the heart that keeps the operation moving, people and community are the lungs that breathe meaning into this wonderful space. 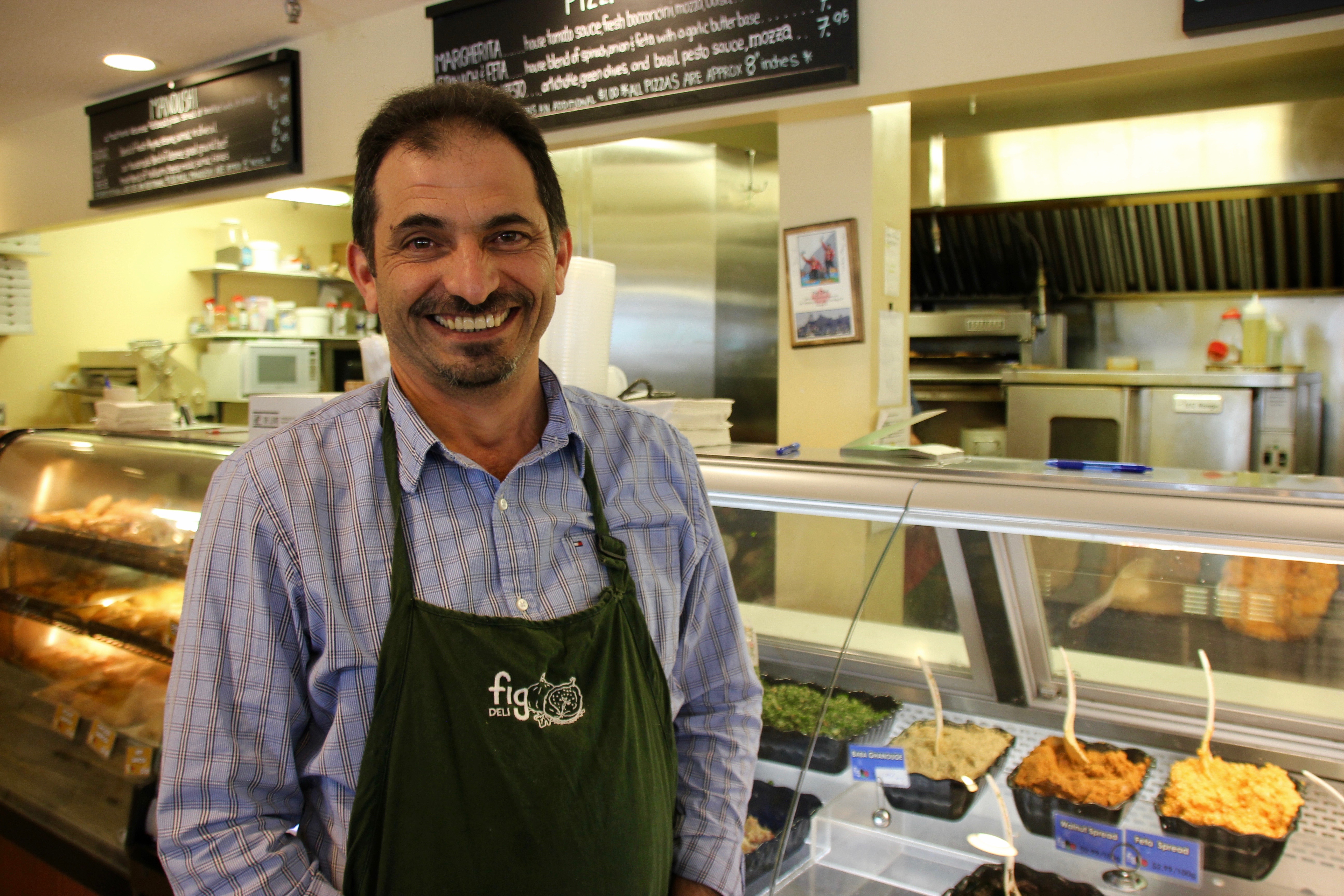 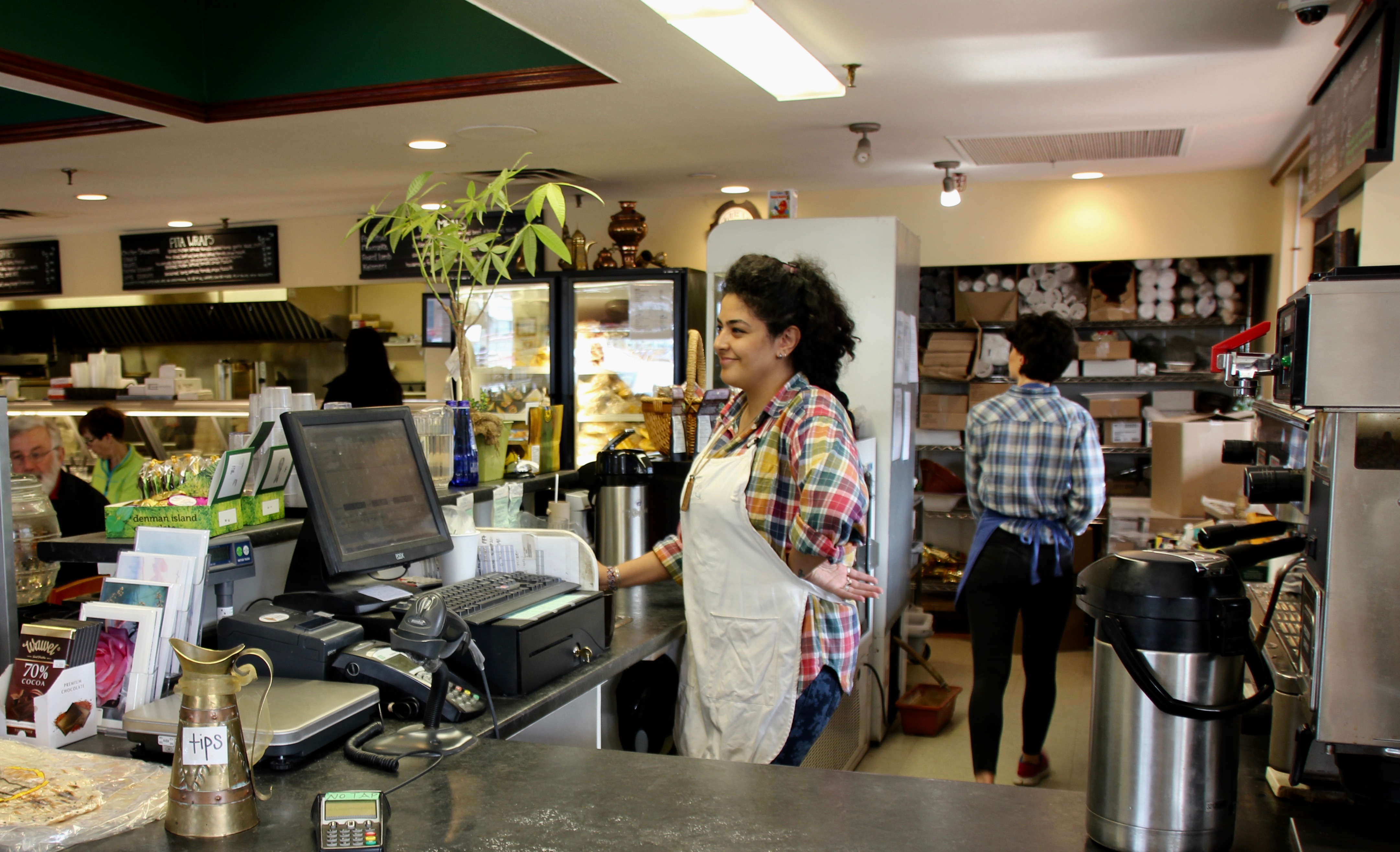