On September 15th, 2013, after more than a year of planning, Banfield Park became the home of a community orchard, which was designed with feedback from the local residents at every level.  The final step of the project took place on the same day as the Vic West Corn Roast.  After planting the fruit and nut trees, community members were able to celebrate the fulfillment of their project at the Corn Roast, a popular community event featuring live music, good food, and zucchini races.

Victoria’s Official Community Plan supports the growth of food on both public and private spaces (Palmer 2013). Vic West already encourages this concept through their Community Commons Garden, which produces fruit, vegetables, and herbs.  “The city came to us,” said Jane Baigent, a member of the orchard planning committee (2013). The VicWest Food Security Collective, a project of the Victoria West Community Association, oversaw the orchard proposition (Parkhouse 2013). The project began with a series of place-making sessions in the community.  Place-making is the “process of taking a space and activating it to engage and gather people" (Parkhouse et al 2013). “We gave people maps and asked them to illustrate where and how they used the park,” said Baigent .  A large area of inactive land near the community centre was identified as a suitable location for the orchard.

Community members also determined the types of trees that would be planted.  Many of the chosen species are common, such as plum, apple, and pear trees, while others such as edible chestnut, fig, and mulberry trees are more unusual. This biodiversity will mitigate the effects of climate change and provide a range of harvest seasons, which makes fruit available to the community for longer periods of time.  Much of the produce will be suitable for immediate consumption, and the rest will be appropriate for foodstuffs such as pies, jams, and baking (Parkhouse et al 2013).  The trees are either semi-dwarf (10-16 feet) or dwarf (8-10 feet) varieties, so that children may easily help harvest the fruit and care for the plants. The trees will also provide habitat for birds and other organisms, as well as attract pollinators.

Patti Parkhouse, the coordinator for the Banfield Park Community Orchard, then contacted Hatchet & Seed Edible Landscapes to “put together a design and facilitate the logistics of the orchard” (Krawcyz and Goldwynn 2013). The City of Victoria had certain requirements for the orchard, such as grass in the centre to maintain a meadow ecosystem.  The Banfield Park Community Orchard Design Team, with advice from two urban food specialists, produced a proposal in December 2012 which was revised in February (Parkhouse et al 2013).  In March 2013, the Victoria Parks, Recreation & Culture Department approved the creation of two prototype orchards, one in Vic West and one in Fernwood. 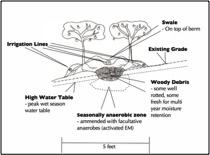 In July, the City of Victoria and Hatchet & Seed excavated large trenches for the orchard.  The rest of the site preparation was completed during a daylong community-building event. Under the direction of Hatchet and Seed’s Tayler Krawczyk and Solara Goldwynn, a small army of volunteers filled the trenches with mulch, rotting wood, and soil to form elevated mounds called hugelkulturs, where the trees are planted partway up the mound.  Hugelkulturs improve drainage for the tree roots and also act as sponges to hold excess rainwater as it flows downslope.  The stored water is released during Victoria’s dry summer months (Parkhouse et al 2013). This system was chosen because of Victoria’s climate, and the high water table and silty soil at the park (Krawcyz and Goldwynn 2013). Later, an eight-foot tall fence was built to keep out the deer.  The City provided the metal posts and the community fundraised for the wire fencing.  Local artists created the three welcoming gates. When the day of the orchard planting came, Hatchet & Seed’s Krawczyk and  Goldwynn, their friend Jenelle Hellyer, and the University of Victoria student covering the event were the first to arrive.  They carried the trees into the orchard and placed them at their designated stake. Patti Parkhouse soon arrived with more planting supplies.  After the fifteen trees were in place, volunteers from the community began arriving.  For those who did not have shovels, there were plenty of extras so everyone could participate in the planting. Jane Baigent had set up a table with displays giving information on the tree species in the orchard, the orchard design, and hugelkulturs.

Groups chose a tree to plant and began digging. The trees were planted and watered with a mixture of mycorrhizal fungi, activated effective microorganisms, and kelp in an extracted format. These provide more nutrients to the trees and help them grow (Krawcyz and Goldwynn 2013)  Small wooden stakes with labels painted by Jane Baigent were inserted by the trees. The volunteer turnout was large and planting accomplished quickly.  Community members carrying tools kept arriving even after everything was accomplished.  Mulch was spread around the trees and then everyone

headed over to the Vic West Annual Corn Roast. “Planting Day achieved our goal beyond what the Orchard Team imagined,” said Patti Parkhouse.  “It was wonderful to see so many from the community come together to plant the trees and enjoy the new Place" (Parkhouse 2013).

While the Vic West orchard will be a source of food, the focus of the project is on the community.  “The orchard is more than fruit production,” emphasizes Baigent. “It’s all about community building.”  Residents can take pride in their group effort, which has strengthened neighbourhood relations and provided a community gathering place for picnics or small events.  Additionally, it supplies a framework for a new generation of food literacy.  Future plans call for seminars on fruit tree care and preserving fruit, harvest events, visits by school groups, and for dedicated individuals, called Fruit Loops, to foster and care for particular trees (Parkhouse et al 2013). The regional Girl Guides plan to become stewards for the orchard (Parkhouse 2013). The produce will be free and available to all who come to pick it. The planners trust that people will treat the orchard with respect and share equally. There are also tentative plans for any excess to go to food kitchens, or community initiatives such as Lifecycles Fruit Tree Project (Parkhouse et al 2013).

These plans, however, will have to wait until the trees begin to bear fruit.  In the meantime, “[s]ince Planting Day many people have visited the Orchard and offered their support” said Patti Parkhouse.  “While I was there one day a child visited “his” tree and told me the story of how he planted it, watered it and comes to say hello before he goes down to the playground.  Three Victoria West Elementary School kindergarten and grade one classes toured the garden in early October.  A parent and two children who participated in planting day lead the tour" (Parkhouse 2013). The orchard has truly gone above and beyond its goal to be a place where the community has and will come together.

University of Victoria, Geography 219: Geography of BC, fall 2013
In GEOG 219 students' final projects consider multi-perspectives on social and environmental sustainibility initiatives in the CRD.
These projects are the result of the students' careful reflection and creativity. They are meant to enlighten, inform and inspire reflection on and care for the special places that we call home.

"As an Albertan, I was unfamiliar with community gardens prior to this project.  It was new and invigorating for me to learn the story of the Vic West Community Orchard and participate in its planting.  I was surprised to learn how initiatives such as this orchard can be heavily community involved and oriented."    Alison Thomas

"I found this project to be a very valuable experience. It made me more aware of grassroots initiatives not just in my neighbourhood, but the CRD as a whole. As well, it led me to a particularly delicious latte at a cool cafe. Wins all around!"   Morgan Henderson