SṈIDȻEȽ (Tod Inlet) is a rich and layered site, both culturally and ecologically. Located in the Coastal Douglas fir moist maritime biogeoclimatic zone, in the Nanaimo lowlands ecosection, SṈIDȻEȽ is surrounded by the lush forests of Gowlland-Tod Provincial Park, which was established in 1994 as a part of the Commonwealth Heritage Legacy Program. The SENCOŦEN name for the area is SṈIDȻEȽ (pronounced ‘sneed-kwuth’) which means “Place of the Blue Grouse”. Blue grouse is an indicator species; its presence told the W̱SÁNEĆ people that food resources were abundant in its chosen habitat. SṈIDȻEȽ was once a W̱SÁNEĆ village site, a place where resources were abundant due to the flourishing ecosystems and its sheltered position beside the Gowlland Mountain Range. SṈIDȻEȽwas renamed Tod Inlet by European settlers for John Tod of the Hudson’s Bay Company in 1859. From 1904-1913, the Vancouver Portland Cement Company operated a limestone quarry in SṈIDȻEȽ, which eventually led to the environmental degradation of the adjacent lands and seafloor of the inlet. The area around the cement quarry became home to the Chinese and Sikh men who worked there, and evidence of their lives is also present throughout the forests of SṈIDȻEȽ. SeaChange Marine Conservation Society has been working at SṈIDȻEȽ since 1998 doing restoration at SṈIDȻEȽ, in collaboration with First Nations and community partners and organizations. 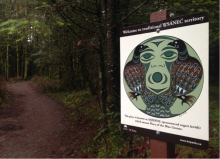 The Many Perspectives of Tod Inlet (SṈIDȻEȽ)

Place of the Blue Grouse 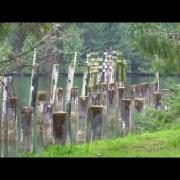